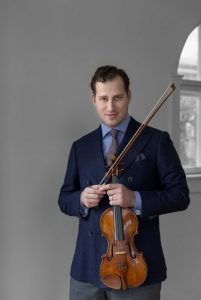 Nikolaj Znaider is renowned as a brilliantly versatile musician, performing both as a virtuoso violin soloist and as a conductor with the world’s preeminent orchestras. He was appointed Principal Guest Conductor of the Mariinsky Orchestra Saint Petersburg in 2010, and was previously Principal Guest Conductor of the Swedish Chamber Orchestra. Znaider enjoys a close relationship with the Filarmonica del Teatro Comunale di Bologna and will return to conduct the orchestra in June 2016.

Conducting highlights of the 15/16 season include appearances as guest conductor with the Danish Radio Symphony, Konzerthausorchester Berlin, Orchestre National de France, Montreal Symphony, Detroit Symphony, Stockholm Philharmonic, Munich Philharmonic, and National Arts Centre Orchestra Ottawa. Znaider also returns to both the Hallé Orchestra and the London Symphony Orchestra, both of which he conducts every season. An increasing number of orchestras now feature Znaider as both soloist and conductor in consecutive subscription weeks and he will spend two weeks with the Washington National Symphony Orchestra in April 2016.

As a soloist, Znaider continues to perform regularly with the world’s leading orchestras. Highlights of the coming season include performances with the San Francisco Symphony Orchestra under the baton of Stéphane Denève, Staatskapelle Dresden with Christian Thielemann, and on tour with the London Symphony Orchestra with Sir Antonio Pappano. In recital and chamber performance, Znaider has appeared at all the major concert halls worldwide. This season sees him perform around Europe in cities including Brussels, Bilbao, Dublin, Copenhagen, and London.

Recording highlights of recent years are the Nielsen Concerto with Alan Gilbert and the New York Philharmonic, Elgar Concerto in B minor with the late Sir Colin Davis and the Staatskapelle Dresden, award-winning recordings of the Brahms and Kongold concertos with Gergiev and the Vienna Philharmonic, the Beethoven and Mendelssohn concertos with Mehta and the Israel Philharmonic, and the Prokofiev Concerto No. 2 together with the Glazunov Concerto with Mariss Jansons and the Bavarian Radio Symphony. Znaider has also recorded the complete works of Johannes Brahms for violin and piano with Yefim Bronfman.

Znaider is passionate about supporting the next generation of musical talent and spent ten years as Founder and Artistic Director of the annual Nordic Music Academy summer school. He is also chair of the jury of the 10th Carl Nielsen International Violin Competition.

Nikolaj Znaider plays the “Kreisler” Guarnerius “del Gesu” 1741 on extended loan to him by The Royal Danish Theater through the generosity of the VELUX Foundation and the Knud Højgaard Foundation.

SHARE
Please be informed that cookies are being used on this site. By agreeing, click on the "I Agree" button or browse further. You can cancel your consent at any time by changing your Internet browser settings and deleting saved cookies. More detailed information is publicly disclosed in the Read More. I Agree